On August 21 the United States experience a total eclipse that went across America. Here in Connecticut we only experience a 73 % eclipse, but that was enough to measure some of the effects in changes in temperature and luminosity.
The idea is that temperature changes reflect the eclipse, so by recording the event I would be  able to get a record of that change in temperature and luminosity. According to the reports before the eclipse the temperature would low as the sun gets covered by the moon.
Method
Using Hobo Probes, I was able to record the event by taking reading every 5 minutes. Temperature was measured in Fahrenheit and luminosity in Lumens. I chose to use 5 probes to be able to correlate the differences between probes and as a quality control element for the experiment. All probes were hang on plain sunlight on a large field about 6 inches each from each other. See picture. 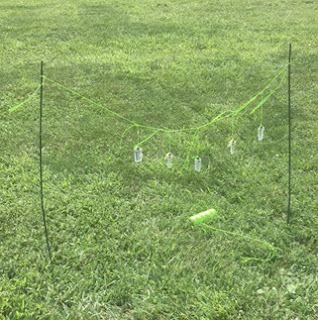 Results
Hobo Probes produces a graph of the event. Here I only show one graph as a example. Hobo probe #2.1. Black line is Temperature and Blue line is light intensity. It is clear that during the eclipse temperature went down together with luminosity.

Here is a summary of the data recorded by using all the 5 probes:

Stats of the results:

Conclusions
Apparently there is no question that there is a change in temperature and luminosity in an eclipse. It would have been more drastic if the experiment was conducted within the path of the total eclipse but that will be next time.